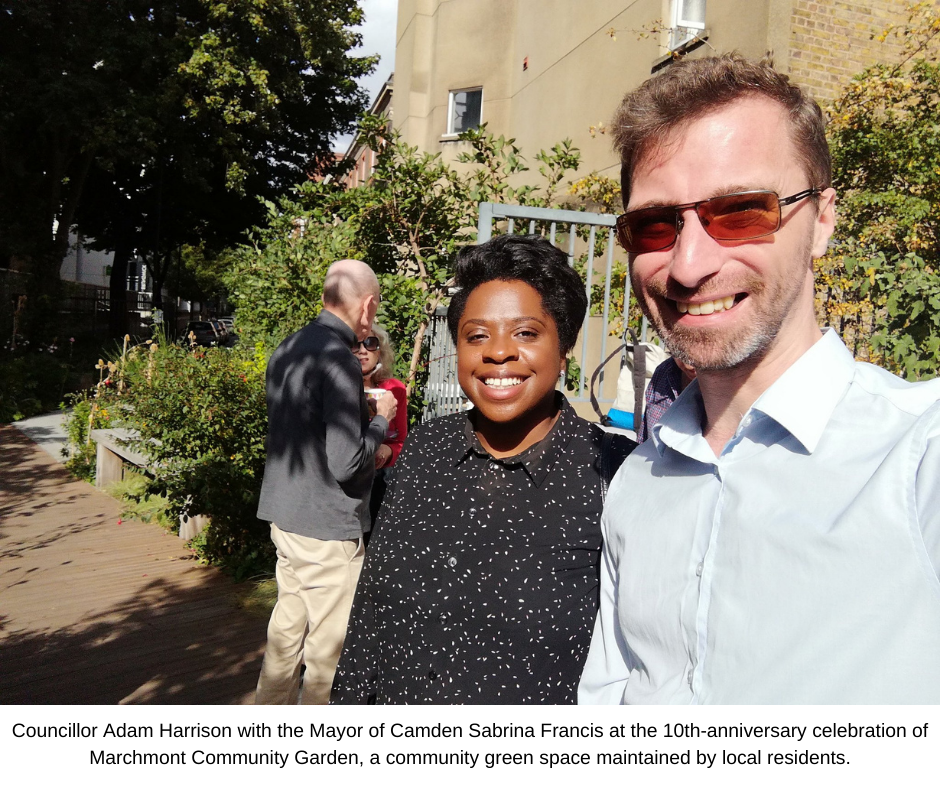 A Cabinet Member for a Sustainable Camden and a judge for The Camden Eco Champion Awards, we had a conversation with Councillor Adam Harrison.

It’s countdown time to the deadline for the Camden Eco Champion Awards! Less than three weeks are left until the nominations for applications close on the 21st of November. It’s all about mobilising the community, so don’t miss your chance to nominate your favourite Champion!

We caught up with one of the judges on the Camden Eco Champion Awards panel to get some insight into what it could mean to be a Champion.

Councillor Adam Harrison has been a Camden councillor for 11 years and a Cabinet Member for the last four years with a responsibility for all matters environmental – that includes air quality, climate change, and other closely related topics such as parking and transport. So, what will be on his mind when he’s selecting Eco Champions?

Work that leads to behavioural change is definitely at the top of Adam’s list. That’s a topic that clearly resonates with the work we’re doing at Camden Clean Air. According to Adam, people’s attitudes on air quality really started to change in the last decade: “There was a point where people were putting up with bad air quality, thinking – Well, I live in a city, what do you expect? But then public perception changed and people started to demand more action and wanted better air”

Do you know someone who’s working hard to change environmental behaviour? Let us know by nominating them for the Camden Eco Champion Awards!

Other projects Adam will be looking out for are ones that focus on some of the next bigger challenges: “Anything future thinking and future-looking.” And what are some of those challenges? Consumption is definitely one to think about, as is circular economy. The list is endless.

Adam also believes public understanding and communication is key to making long-lasting change and as a council, Camden welcomes community action. “We know it will bring about deeper and stronger change if we’re able to work with residents and all sorts of fantastic organisations that we have in the Borough,” according to Adam.

Camden Council has been at the forefront of citizen participation by setting up a number of citizen assemblies. Back in July 2019, Camden actually held the UK’s first Citizens’ Assembly on the climate crisis. Aren’t we excited to be part of such a forward-thinking borough?

The Camden Eco Champion Awards aim to reward citizen participation and with both Councillor Adam Harrison and the Mayor of Camden Sabrina Francis on the judging panel we expect those voices will be heard. For Adam part of the excitement of being on the panel is to see what people are doing: “I’ll learn things as well and I want to understand what people are doing. I like to have new ideas and people are coming up with new ideas all the time!”

And in terms of new ideas, what is the vision for Camden in 5, 10, 30 years’ time? According to Adam, Camden will be a place where “we would be more understanding as a society of the impact that we’re having and seek to live more lightly on the earth.” In order to make that happen, we need active citizen participation. “Some of that will come from bottom-up ground-up initiatives where we start to test things. That’s what happened in the past with the digital revolution where the internet didn’t just appear – the first email was sent in the 60s or 70s!”

The Camden Eco Champion Awards are definitely here to reward ground-up initiatives that test ideas and lead us to a more exciting vision for Camden. And these ideas are welcome from children, young people and adults alike.

“Kids see things a lot more clearly than adults do and they cut to the chase. They are the ones who get to live with the effects of climate change longer,” says Adam. “We really have to make sure children’s voices are heard.”